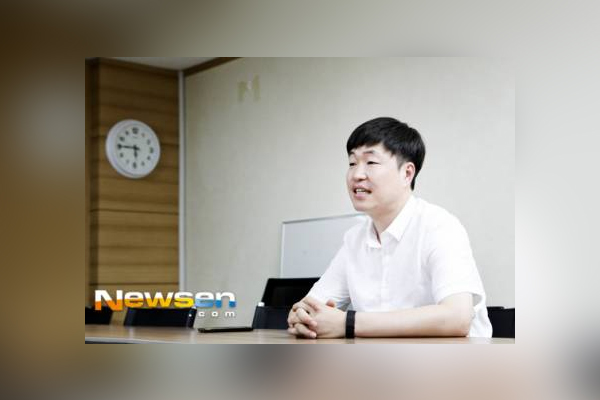 "Dad," the birth of the movie "Tunnel." CEO Jang Won-seok of B.A. Entertainment expressed his thoughts on the U.S. hit.

Tunnel has been at the top of box office for 21 days, setting the record for the biggest box office in 2016. As of August 31, the movie has attracted a cumulative 6.62 million viewers and is on a roll. Casting is not the only thing that makes movies special. Social critical humor codes and unique satire and humor techniques by director Kim Sung-hoon are gaining positive reviews, proving the power of storytelling.

Jang Won-seok, the producer of the film, recently met at the BH Entertainment office in Gangnam-gu, Seoul. Jang welcomed the reporter with a brighter face. The movie sheds some of the burdens on box office success. When Jang said congratulations, he sighed with relief.

I`m most happy for the producer because I`ve passed the profit and loss point. It's a relief that the investment didn't hurt the movie stars. The most basic responsibility for production has been given. It's a good thing. Tunnel' is a movie that was done by actor Ha Jung-woo and staff who made the movie "Go to the End" together with director Kim Sung-hoon. Thank you for reminding me of 2016, the hottest year in my movie life."

Tunnel is the longest-running box office title in 2016. He surpassed his previous record of "Return to Korea" (17th) and became the number one box office player in 2016 for the longest time in a row. In the first half of this year, major films such as "To Busan" were ranked No. 1 in box office for 14 days. Why is the audience so excited for such a long time?

I think it`s thanks to your sympathy for the film. Perhaps, the fun and empathy for the subject have gained popularity. It is worth making because it is not just fun but a good story."

Tunnel is screened in the U.S. and Canada on August 25 starting with Australia and New Zealand. The movie will be released in the U.K. on September 2, and will meet audiences at 36 theaters in North America, two in the U.K., and 15 in Australia and New Zealand. The U.S. is also showing a strong response. Local fans do not have any sympathy for Korean sentiment, but they are excited about the power of the story.

There will be about 12 movies released in the U.S. last week, and Tunnel has been ranked 28th on the weekly chart for three days. The earnings per share exceed $5,000. He is ranked seventh. Thank you for loving me so much."

Tunnel is also a fun way to share the feeling of national trauma. It must have been difficult for foreign audiences to sympathize with the national sentiment. Nevertheless, Tunnel's storytelling power worked. The trauma of facing disaster and the satire of society were universal.

The misbehavior of the national system, which is overcome in times of disaster, is largely the subject of satire and criticism, which happens everywhere in the world. The U.S. is no exception. The question of whether the disaster relief system worked out well when the 911 terror happened is still hot topic. Japan has also been under fire for having been busy following the Hiroshima nuclear crisis. How to deal with an unexpected disaster. Tunnel situations can be Korean, but I think they are universal."

Attention is focusing on the future of CEO Jang Won-seok, who successfully settled down the Tunnel in theaters in the summer. He asked Jang how he looked at the U.S. market.

Marvels and big blockbusters work well. In Korea, it is a difference compared to the success of big films starring top stars. Hollywood often buys the rights to remake Korean movies. You're being recognized for storytelling. It is the result of a profound concern. It is also important to note that most of the movie stars are Hollywood kid and universal sentiment. It is analyzed that the U.S. showed interest in a solid story that is emotionally understandable."